Contributed by:
sights2see
0 review | 3 videos | 4 images , including 3 geotagged
View on large map in a new window

Ranked #1 of 4 in Centre-Val de Loire

The royal Château de Chambord at Chambord, Loir-et-Cher, France, is one of the most recognisable châteaux in the world because of its very distinctive French Renaissance architecture which blends traditional French medieval forms with classical Renaissance structures. The building, which was never completed, was constructed by King Francis I of France.

Chambord is the largest château in the Loire Valley; it was built to serve as a hunting lodge for Francis I, who maintained his royal residences at the châteaux of Blois and Amboise. The original design of the Château de Chambord is attributed, though with some doubt, to Domenico da Cortona; Leonardo da Vinci may also have been involved.

Chambord was altered considerably during the twenty-eight years of its construction (1519–1547), during which it was overseen on-site by Pierre Nepveu. With the château nearing completion, Francis showed off his enormous symbol of wealth and power by hosting his old archrival, Emperor Charles V, at Chambord.

In 1792, in the wake of the French Revolution, some of the furnishings were sold and timber removed. For a time the building was left abandoned, though in the 19th century some attempts were made at restoration. During the Second World War, art works from the collections of the Louvre and the Château de Compiègne were moved to the Château de Chambord. The château is now open to the public, receiving 700,000 visitors in 2007. Flooding in June 2016 damaged the grounds but not the château... 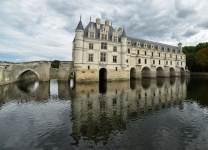