Contributed by:
Alexandra
0 review | 2 videos | 7 images , including 3 geotagged
View on large map in a new window

The Pont du Gard is an ancient Roman aqueduct that crosses the Gardon River near the town of Vers-Pont-du-Gard in southern France. The Pont du Gard, built as three tiers of archways to bring water to the city of Nîmes, is the highest of all elevated Roman aqueducts, and one of the best preserved. It was added to UNESCO's list of World Heritage Sites in 1985 because of its historical importance.

The aqueduct bridge is part of the Nîmes aqueduct, a 50-kilometre (31 mi) system built in the first century AD to carry water from a spring at Uzès to the Roman colony of Nemausus (Nîmes). Because of the uneven terrain between the two points, the mostly underground aqueduct followed a long, winding route that called for a bridge across the gorge of the Gardon River. The bridge has three tiers of arches, stands 48.8 m (160 ft) high, and descends a mere 2.5 centimetres (1 in) – a gradient of only 1 in 18,241 – while the whole aqueduct descends in height by only 12.6 m (41 ft) over its entire length, which is indicative of the great precision that Roman engineers were able to achieve using simple technology. The aqueduct formerly carried an estimated 40,000 m3 (8,800,000 imp gal) of water a day to the fountains, baths and homes of the citizens of Nîmes. It may have been in use as late as the 6th century, with some parts used for significantly longer, but a lack of maintenance after the 4th century led to... 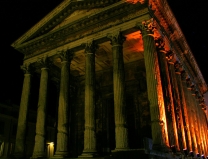 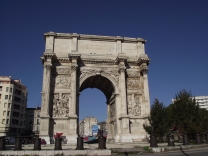