Contributed by:
sights2see
0 review | 3 videos | 7 images , including 3 geotagged
View on large map in a new window

Buda Castle (Hungarian: Budavári Palota, German: Burgpalast) is the historical castle and palace complex of the Hungarian kings in Budapest. It was first completed in 1265, but the massive Baroque palace today occupying most of the site was built between 1749 and 1769. The complex in the past was referred to as either the Royal Palace (Hungarian: Királyi-palota) or the Royal Castle (Hungarian: Királyi Vár, German: Königliche Burg). The castle now houses the Hungarian National Gallery and The Budapest History Museum.

Buda Castle sits on the south tip of Castle Hill, bounded on the north by what is known as the Castle District (Várnegyed), which is famous for medieval, Baroque and 19th-century houses, churches and public buildings. The hill is linked to Clark Ádám Square and the Széchenyi Chain Bridge by the Castle Hill Funicular. The castle is a part of the Budapest World Heritage Site, so declared in 1987.

The first royal residence on the Castle Hill was built by King Béla IV of Hungary between 1247 and 1265. It is uncertain whether it was situated on the southern tip of the hill or on the northern elevation, near the Kammerhof.

The oldest part of the present-day palace was built in the 14th century by Stephen, Duke of Slavonia, who was the younger brother of King Louis I of Hungary. Only the foundations remain of the castle keep, which was known as Stephen's Tower (Hungarian: István-torony). The Gothic palace of King Louis I was arranged around a narrow courtyard next to the keep. 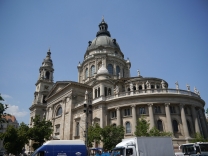 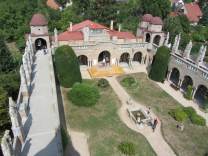