Contributed by:
sights2see
0 review | 0 video | 7 images , including 2 geotagged
View on large map in a new window

Ranked #1 of 1 in Cesky Krumlov Český Krumlov Castle is a castle located in the city of Český Krumlov in the Czech Republic. It dates back to 1240 when the first castle was built by the Witigonen family, the main branch of the powerful Rosenberg family.

Currently the castle is listed as a national heritage site and thus serves as a major tourist attraction.

By the 17th century the Rosenbergs had died out, and Holy Roman Emperor Ferdinand II gave the dominion of Krumau to Hans Ulrich von Eggenberg, naming him Duke of Krumau. After the death of Hans Ulrich's son, Johann Anton I von Eggenberg, the castle was administered for the period between 1649 and 1664 by his widow, Anna Maria.

One of her two sons, Johann Christian I von Eggenberg, was responsible for the Baroque renovations and expansions to the castle, including the castle theatre now called the Eggenberg Theatre. When the male line of the Eggenbergs died out in 1717, the castle and duchy passed into the possession of the Schwarzenbergs. In 1947, the Schwarzenberg property, including Český Krumlov, was transferred to the Czech provincial properties and in 1950 it became the property of the Czechoslovak State. The entire area was declared a national monument in 1989 and in 1992 it was added to the UNESCO World Heritage List.

The castle houses the Český Krumlov Baroque Theatre, which is situated on the Vth Castle Courtyard. It is one of the world's most completely... 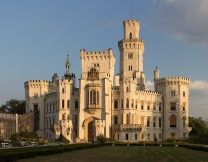 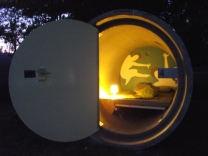