Contributed by:
sights2see
0 review | 3 videos | 6 images , including 4 geotagged
View on large map in a new window

The Château d'Angers is a castle in the city of Angers in the Loire Valley, in the département of Maine-et-Loire, in France. Founded in the 9th century by the Counts of Anjou, it was expanded to its current size in the 13th century. It is located overhanging the river Maine. It is a listed historical monument since 1875. Now open to the public, the Château d'Angers is home of the Apocalypse Tapestry.

Originally, the Château d'Angers was built as a fortress at a site inhabited by the Romans because of its strategic defensive location.

In the 9th century, the Bishop of Angers gave the Counts of Anjou permission to build a castle in Angers. The construction of the first castle begun under Count Fulk III (970–1040), celebrated for his construction of dozens of castles, who built it to protect Anjou from the Normans. It became part of the Angevin Empire of the Plantagenet Kings of England during the 12th century. In 1204, the region was conquered by Philip II and the new castle was constructed during the minority of his grandson, Louis IX ("Saint Louis") in the early part of the 13th century. Louis IX rebuilt the castle in whitestone and black slate, with 17 semicircular towers. The construction undertaken in 1234 cost 4,422 livres, roughly one per cent of the estimated royal revenue at the time. Louis gave the castle to his brother, Charles in 1246.

In 1352, King John II le Bon, gave the castle to his second son, Louis who later became count of Anjou. Married to the daughter of the wealthy Duke of Brittany, Louis had the castle modified, and in 1373 commissioned the famous Apocalypse Tapestry from the painter Hennequin de Bruges and the Parisian tapestry-weaver Nicolas Bataille. Louis II (Louis I's son) and Yolande d'Aragon added a chapel (1405–12) and royal apartments to the complex. The chapel is a sainte chapelle, the name given to churches which enshrined a relic of the Passion. The relic at Angers was a splinter of the fragment of the True Cross which had been acquired by Louis IX.

In the early 15th century, the hapless dauphin who, with the assistance of Joan of Arc would become... 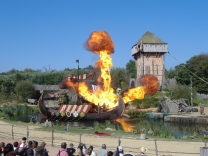