Contributed by:
sights2see
0 review | 3 videos | 5 images , including 1 geotagged
View on large map in a new window

Ranked #1 of 1 in Carcassonne The Cité de Carcassonne (Occitan: Ciutat de Carcassona Occitan pronunciation: [siw'tat ðe kaɾkaˈsunɔ]) is a medieval citadel located in the French city of Carcassonne, in the department of Aude, Languedoc-Roussillon region. It is located on a hill on the right bank of the River Aude, in the south-east part of the city proper.

Founded during the Gallo-Roman period, the citadel derives its reputation from its 3 kilometres (1.9 mi) long double surrounding walls interspersed by 52 towers. The town has about 2,500 years of history and has seen the Romans, Visigoths, Saracens and Crusaders. At the beginning of its history it was a Gaulish settlement then in the 3rd century A.D., the Romans decided to transform it into a fortified town. The Roman defences were in place by 333 AD, when the town is described as a castellum. The original walls were supported by between 34 and 40 towers, spaced from 18 to 30 metres apart along the curtain wall. Each tower was semicircular in plan and about 14 metres tall. There were probably four main entrances to the town.

The Gallo-Roman walls were rebuilt during the town's occupation by the Visigoths in the 5th and 6th centuries, but the original structure remained in place. After 1226, an additional line of fortifications was added outside of the Roman walls. The town was finally annexed to the kingdom of France in 1247 A.D. It provided a strong French frontier between France and the Crown of Aragon. During this period, the inner, Roman walls were largely demolished and replaced, while the new outer walls were reinforced and extended to the south. The new towers built during this work were... 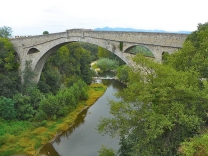 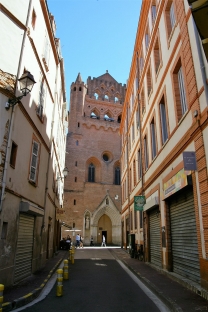 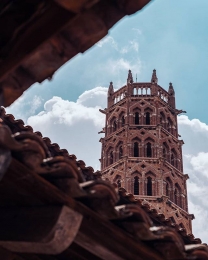