The Giza pyramid complex (Arabic: أهرامات الجيزة‎‎, IPA: [ʔɑhɾɑˈmɑːt elˈɡiːzæ], "pyramids of Giza") is an archaeological site on the Giza Plateau, on the outskirts of Cairo, Egypt.

This complex of ancient monuments includes the three pyramid complexes known as the Great Pyramids, the massive sculpture known as the Great Sphinx, several cemeteries, a workers' village and an industrial complex. It is located in the Libyan Desert, approximately 9 km (5 mi) west of the Nile river at the old town of Giza, and about 13 km (8 mi) southwest of Cairo city centre.

The pyramids, which have historically loomed large as emblems of ancient Egypt in the Western imagination, were popularised in Hellenistic times, when the Great Pyramid was listed by Antipater of Sidon as one of the Seven Wonders of the World. It is by far the oldest of the ancient Wonders and the only one still in... 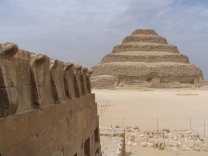 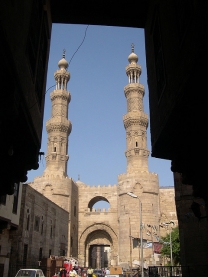 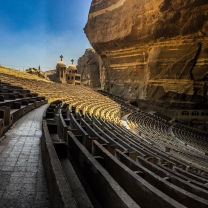 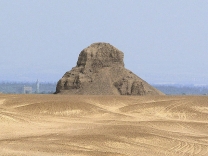