Trolltunga (Troll tongue) is a rock formation situated about 1,100 metres above sea level in the municipality of Odda in Hordaland county, Norway. The special cliff is jutting horizontally out from the mountain, into free air about 700 metres (2,300 ft) above the north side of the lake Ringedalsvatnet.

Popularity of the hike to Trolltunga and rock formation itself has exploded in recent years. The increased popularity has turned Trolltunga into a national icon and a major tourist attraction for the region. Until 2010, less than 800 people hiked to Trolltunga each year. In 2016 more than 80,000 people hiked the 27 kilometres round-trip from Skjeggedal, making it one of Norway's most popular hikes.

The cliff is part of the Precambrian bedrock and was formed during the Ice Age, approximately 10,000 years ago, when the edges of the glacier reached the cliff. The water from the glacier froze in the crevices of the mountain and eventually broke off large, angular blocks, which were later carried away with the glacier. Along the cliff itself, a gneiss, there continues to be deep cracks. The trail to Trolltunga also passes through the bedrock and washed slippery hillsides in the background also containing gneiss.

Trolltunga is located 17 kilometres from city centre in Odda, Hordaland, a county in Western Norway. The city of Bergen, is about 190 kilometres from the site via main roads.

The trailhead is located by a small parking area with toilet facilities at Skjeggedal, about 7 kilometres from Norwegian National Road 13 in Tyssedalen, near the dam at the end of Ringedalsvatnet. Parking costs 500 NOK/day for the lower car park (approx. 62 USDor 52 EUR).

The hike from the parking area to Trolltunga and back again is a 27 kilometre round-trip in terrain with 1,100 metres of elevation gain, and takes approximately 10–12 hours, including breaks.

The hiking trail to Trolltunga

Near the parking area at Skjeggedal there is a funicular called Mågelibanen (not in operation). The trail to Trolltunga begins here, on the left side of the... 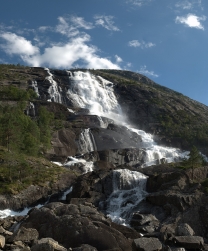 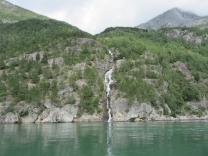 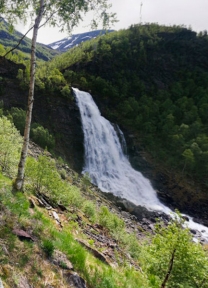 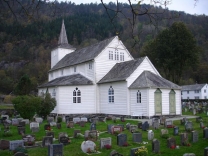 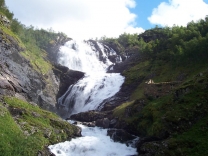 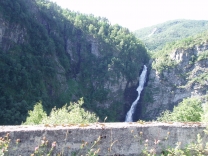 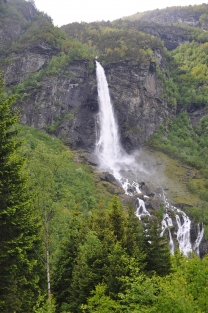 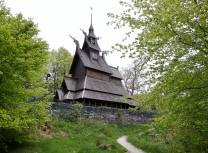 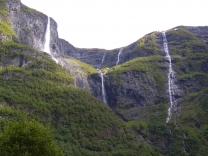